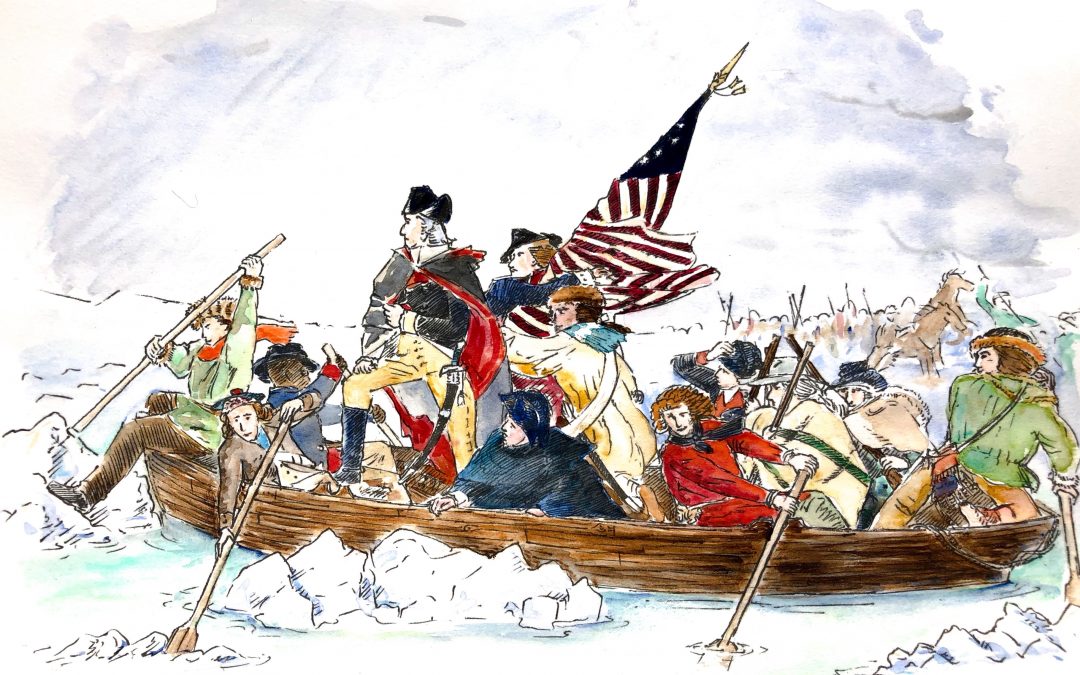 December twenty-fifth, 1776 was a frosty morning along the Delaware River and promised a storm by the evening. A few miles away, the Patriot camp began to stir as Washington and his officers conferred together preparing the troops for a surprise march.

The conflict was dragging on. After the initial victory at Boston, Washington had suffered a series of defeats, including a monumental lose at New York City. On top of this, supplies were running short, food was scant, and troops were deserting.

The army could not continue in its condition; the Patriots needed a victory.

Nearby a possible victory revealed itself. The British thought the patriot forces were retreating. Thinking Washington and his troops were too disorganized and demoralized to pose a threat to their soldiers, they camped only five miles away in New Jersey. While Hessians, German mercenaries, were celebrating their victories and Christmas in Trenton.

Washington planned to cross the Delaware River for a surprise attack.

Washington desperately needed this victory. Success at Trenton would boost American morale, and give them valuable food and ammunition.

After the long surprise march, in freezing temperatures, the Patriot troops made it to the river edge.

Washington split his forces into three groups; each would navigate the freezing Delaware River under cover of darkness. The river was so treacherous that two of groups couldn’t even cross the river.

After hours of strenuous work, Washington’s and his troops successfully made it across the river.

After crossing the Delaware Washington had to make the difficult decision to continue the attack.

A hundred things could have gone wrong, several already had, but with the grit of an American colonist, trusting in Providence and the righteousness of his cause Washington continued with the attack.

Providence continues to preserve the patriot cause.

At Trenton, God blessed the hard work and careful planning of Washington and his officers. The attack at Trenton was a complete surprise and a huge victory. Winning this battle helped keep the Continental Army in the field, allowing us to continue the war to its end.

Providence continued to preserve the patriot cause throughout the war. The Lord who rules over the nations aided us at our nation’s beginning preserved us throughout the war, and at the end of the war brought us to a glorious victory. The Independence we declared in 1776 was finally realized after the fall of Yorktown in 1781 and the resulting Peace of Paris in 1783.

However, we can only continue in this freedom so long as we serve the God that secured it.

Friends, I hope you enjoyed today’s story. It was an honor to share a historical account revealing the faithfulness of God.

Did you happen to downloaded your free copy of my coloring page in honor of Independence Day? If not you can do so by signing up for my monthly newsletter.