The Storyteller, and Sweden’s 3 glorious secrets. 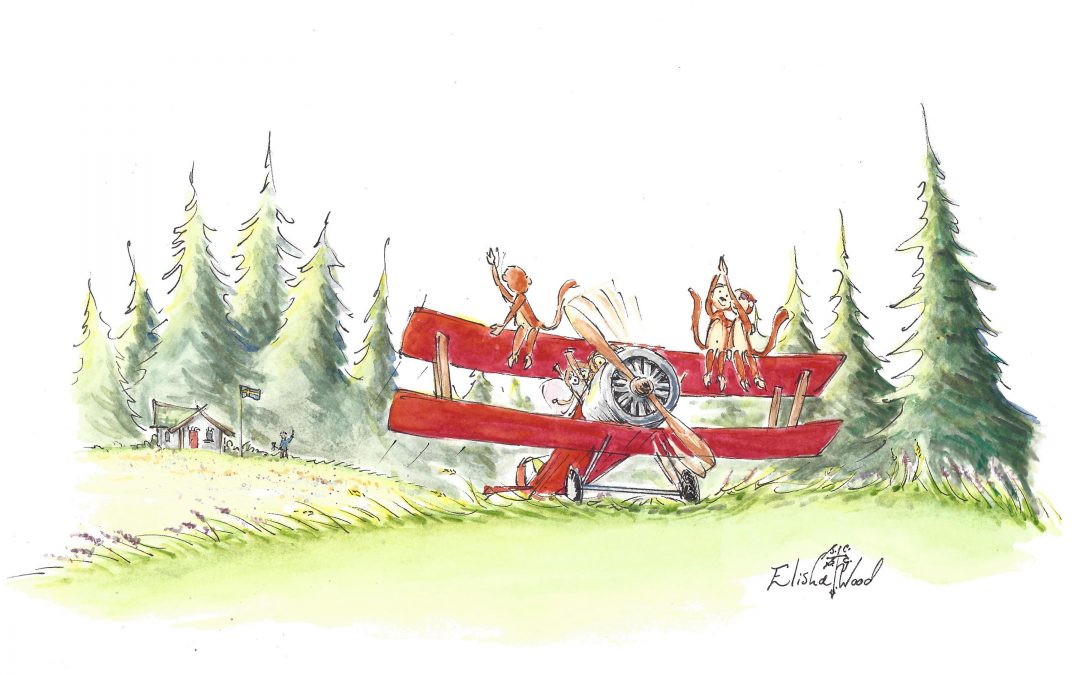 A Rainy Day In Dublin, and The Storyteller.

It all began on a rainy day in Dublin Ireland. After visiting tourist sites and enjoying the local tea houses, our Zoo friends received an unexpected note from “the Storyteller.” The mysterious message read,

“Three questions solve, three tales unfold, a story and adventure is your goal.

Who was Gustav Vasa?

What made Sweden a gem of the northern seas?

Who was the Lion of the North, who was the Snow King?

Find the Storyteller of Strömborg on Stockholm’s shores.

Understandably, the animals were puzzled by this strange note; they decided to find this Storyteller post-haste.

The Mysterious Note, and A Little Red Bi-Plane. 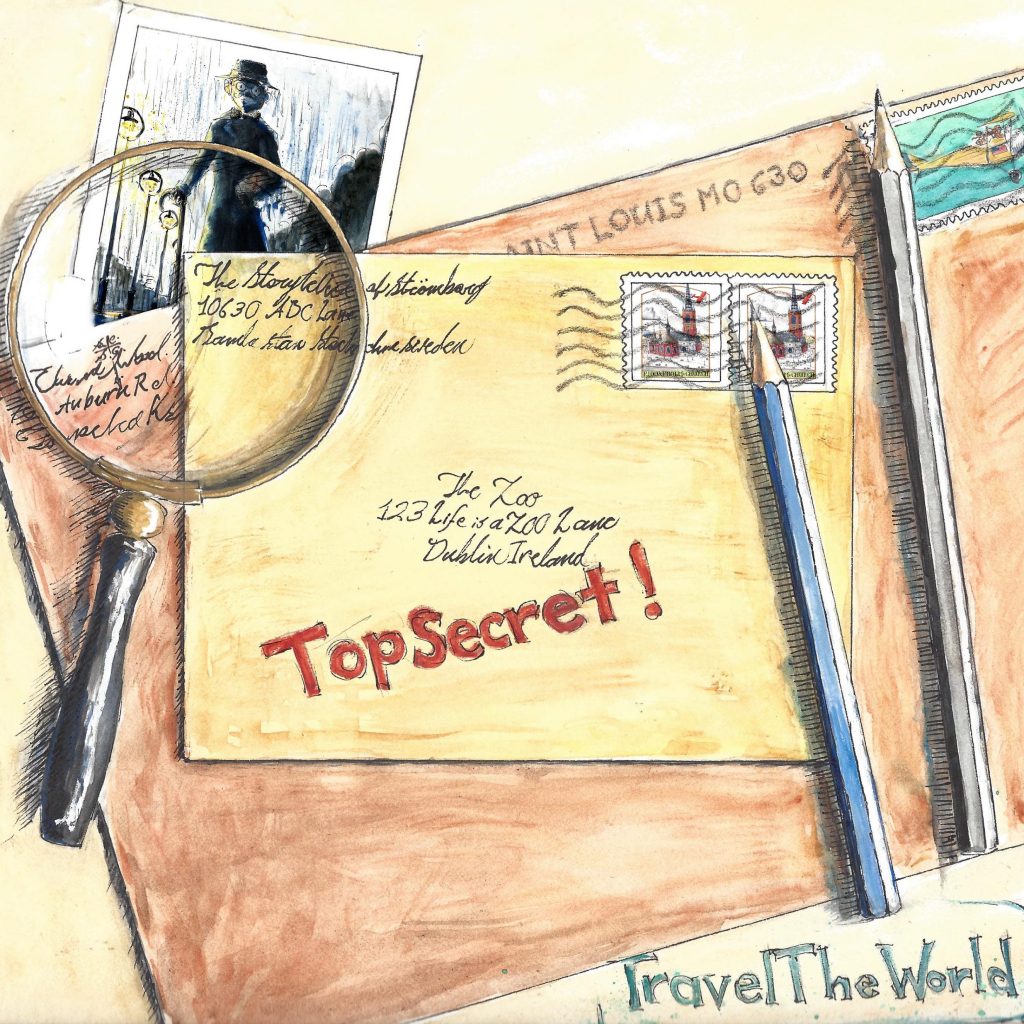 In search of the Elusive Storyteller, the Zoo traveled to Sweden. After flying around for a while, they found a mountain meadow to land their little red bi-plane in. Leaving the enchanted forest and majestic mountains behind them, our animal friends made it to the ancient island city of Stockholm.

As they began their search, Ms. Ellie was quite distressed that she didn’t have time to stop and refill her tea kettle; meanwhile, the monkey siblings regretted having to pass by so many wonderful coffee shops. Finally, our animal friends made it to the little island of Strömsborg to search for the mysterious storyteller. They quickly discovered that the Island of Strömsborg is quite small. The Zoo looked over the entire island for the confounding writer. They checked the single building on the little isle, they even searched each room, but nowhere could they find the elusive Storyteller.

With their long search yielding no results, Ellie recommended going back to one of the larger islands of Gamla Stan and checking the local tea shops; she said, “That’s where I would be if I were lost.” After enjoying a drink at a quaint tea shop, the Zoo resumed their business. Our animal friends began to search the streets of this larger island. Finally, to their great surprise, they came across an ancient building with the words, “The Storyteller” written above it.

A Kind Man With Coffee and A Story

Our animal friends ascended the steps of the building and knocked on the curious door.

A kind man opened the door, greeted them, and welcomed the Zoo into his home.

The Storytellers house was constructed in the sturdy style of the northern nations. Treasures worthy of a king’s castle filled the rooms. However, the home was not cluttered with dusty relics like a flee market but filled with timeless artifacts, each just waiting to reveal their secrets.

The animals looked at their host, he was dressed as a librarian but carried himself as a soldier or a noble leader. The Storyteller was tall and thin, though ancient, his constitution was healthy and well built, his face was rounded and had a kind countenance. The storyteller’s hair was white as the mountain peaks; his eyes were bluer than the Baltic Sea. His face shown with sincere kindness, crowned with a merry smile. 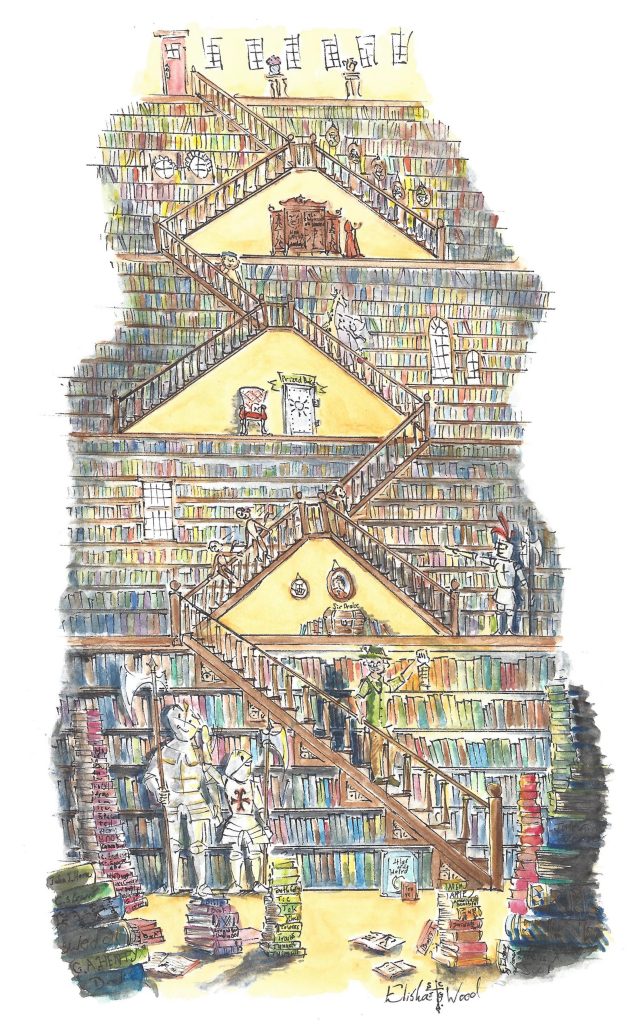 Journey to the heart of the Library.

The Storyteller offered each of the animals a cup of fresh, fragrant, coffee.

After coffee, the noble-man lighted a lantern and led the Zoo deep into his magnificent library. They traveled down flight after flight of stairs, through a labyrinth of twist and turns, and past towers of stacked books. At last, they made it to the Storyteller’s great treasure, the heart of the library. The storyteller searched through the shelves. Finally, the old man took out an ancient little book titled the “Rise Of Sweden And The Lion King.”

The Zoo all sat around anxiously waiting to hear the story their host had found; the Storyteller sat in his high backed chair and started to read.

The story begins, time to imagine.

Our tale begins in a Sweden unlike the bustling nation of today, with its colorful Dala horses and merry citizenry. The Sweden of the 16th century was a dark, frozen land bound in slavery, with its people lost in ignorance and superstition. In the central south part of this frozen nation lies the town of Örebro. In Örebro lived two brothers by the names of, Olaf and Lawrence Petri, God would use these children to bring the light of the gospel to warm their homeland. 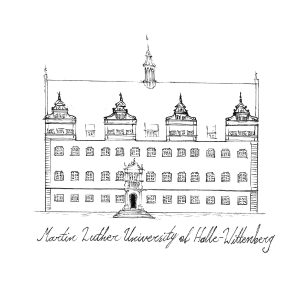 Two Brothers and the Reformation.

Due to their father’s successful ironworks, the Petri boys were able to attend a nearby college. The ambitious brothers were planning on joining the ministry of the Roman Catholic Church. However, Providence had other plans for the boy’s lives. At 19 years old Olaf left Sweden to continue his studies at a renown college in Rome. Traveling through Germany, Olaf heard that the light of the Gospel was shining in Wittenburg, where a monk named Martin Luther was teaching God’s Word. Instead of continuing to Rome, Olaf decided to go to Germany where the Truth was brightly shining. Thus God prevented Olaf from going to Rome where he would have been taught all of the superstitions and sins of that bloody city (Rome was a morally corrupt place during this time*) In Germany, God introduced Olaf and later his brother Lawrence to the light of the Gospel.

Olaf was with Martin Luther when he nailed his 95 theses on the church doors of Wittenburg. From the German reformers, the Petri brothers learned that they could only receive salvation by the grace of God, who saves all who put their faith in Christ alone as revealed in the Holy Bible. They learned the uselessness of trusting in the traditions of men, good works, or prayers to saints for salvation*. Olaf and Lawrence put their faith in God, firmly believing his word. The two brothers returned to Sweden to share the good news of Christ with their beloved homeland.

Meanwhile, in Sweden, a bloody war was raging since 1512 A.D. against the invading nation of Denmark and the cruel Danish king. One of the soldiers who fought heroically against the Danes was Gustav Vasa. King Christian II of Denmark, offering peace, convinced the Swedes to hand their brave hero over to him as a hostage. While captive, Gustav heard that the Danes were planning on reinvading Sweden, enslaving the population and stealing its treasures. Our brave hero decided he needed to escape and aid his homeland in this upcoming war. After months of running from his captor, Gustav finally evaded his pursuers.

Gustav Vasa made it back to his homeland only to find that King Christian II had already invaded Sweden. Only two cities were still fighting against the Danes. Gustav tried to rally his countrymen to join him in the fight, but they would not listen. Sweden was defeated. They were willing to accept peace at any cost even shame and slavery. King Christian’s II coronation as king of Sweden was to take place at Stockholm where he invited much of the nobility to a feast. Unfortunately, the banquet was just a trick, after three days the king turned on the nobles and had them all massacred. The two Petri brothers who had recently returned to Sweden lost their mentor and nearly lost their lives in the massacre. Furthermore, Gustav lost his father and brother-in-law in this terrible plot.

The Petri brothers speared from certain death began to preach all the more powerfully to their countrymen. Meanwhile, after the peasants heard that the king of Denmark was going to take away their weapons and set heavy taxes on their country, accepted Gustav Vasa as their leader and agreed to follow him in a war against King Christian II of Denmark. 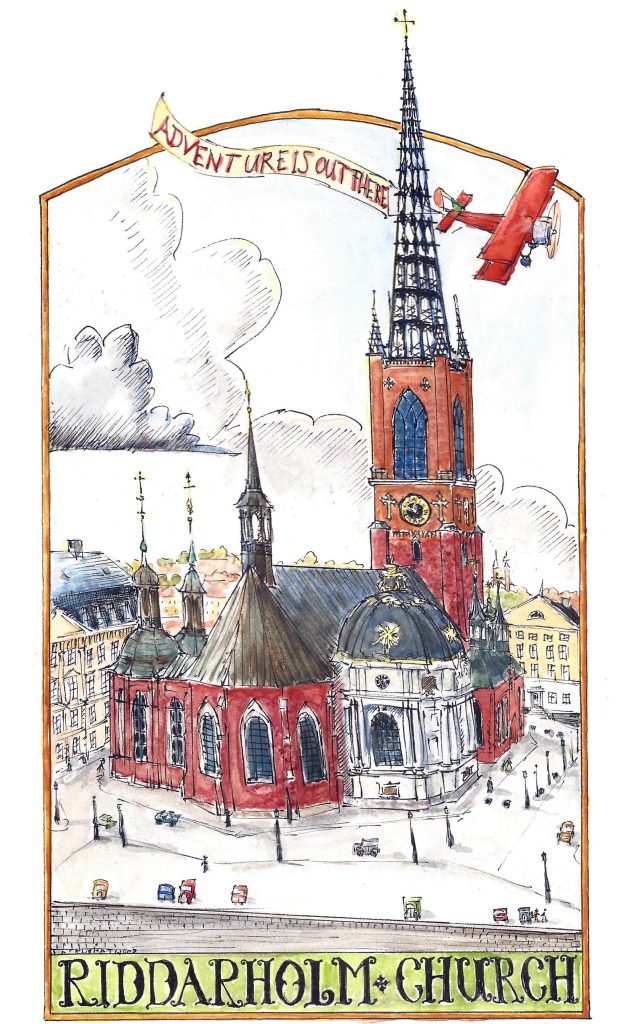 The power of the Gospel in Sweden.

While Gustav Vasa was endeavoring to free Sweden, he met Olaf and Lawrance Petri and promised to aid the Reformation. At first, Gustav helped the reformers clandestine and tactfully, but eventually he supported the reformation openly. The Roman Catholic Church was not willing to subjugate its power beneath the Word of God. It became apparent that the Catholic priest would do anything to keep their rule. These priests spread lies among the people causing civil unrest, they taxed the peasants three times more than the government and controlled the majority of the castles. Gustav determined to significantly reduce the power of the priests while allowing the people to choose the religion they wanted to believe. It was a bitter struggle with these ruling priest, but in the end, the king overcame them.

Gustav Vasa strengthened Sweden; In June of 1523, he was crowned king. God used the wisdom of the king and the preaching of the Petri Brothers to reform the nation.

The chapter came to an end as the Storyteller closed the book. The animals were all a little sad to end their imaginary ventures with King Gustav in the 16th century. However, the Storyteller reminded them that a new adventure could not begin until the current one ends. The kind narrator promised next time to share the story of Gustav’s grandson, the Lion King, who delivers Christendom.

The answer to the first mystery of the riddle, “who made Sweden great?” Was it the patriotism of the Swedish people? Could it have been the determination of Gustav or the preaching of the Petri brothers? The correct answer is none of the above.

No individual made Sweden great it was God’s Truth and the Holy Spirit that freed and exulted the Swedish nation. For Christ hath said,  “And ye shall know the truth, and the truth shall make you free.” (KJV. John 8:32) Also, “Jesus saith unto him, I am the way, the truth, and the life: no man cometh unto the Father, but by me.”(John 14:6). Christ who was born of a virgin, died on the Cross, rose again, and now reigns in Heaven. Christ who is sovereign used Gustav Vasa, the Petri brothers, and the Swedish people to free their homeland.

To answer the second question in the riddle, Gustav Vasa was a tool used by God to liberate his people. Gustav became the Father of Modern Sweden.

So long to the Storyteller…for now.

Climbing the steps out of the library, the Zoo bid their kind host farewell. Walking down the Streets of Stockholm, these merry animals boarded their little red bi-plane. The animals waved goodbye to the Storyteller till he faded out of sight.

Our Zoo friends must continue their travels before returning home to start school. I am sure each of the animals are looking forward to seeing the Storyteller soon. They are all anxious to solve the third mystery of the riddle and hear the tale of the Lion King.

The History of the Reformation in Europe in the Time of Calvin, vol. 4

Until next time, Sincerely, 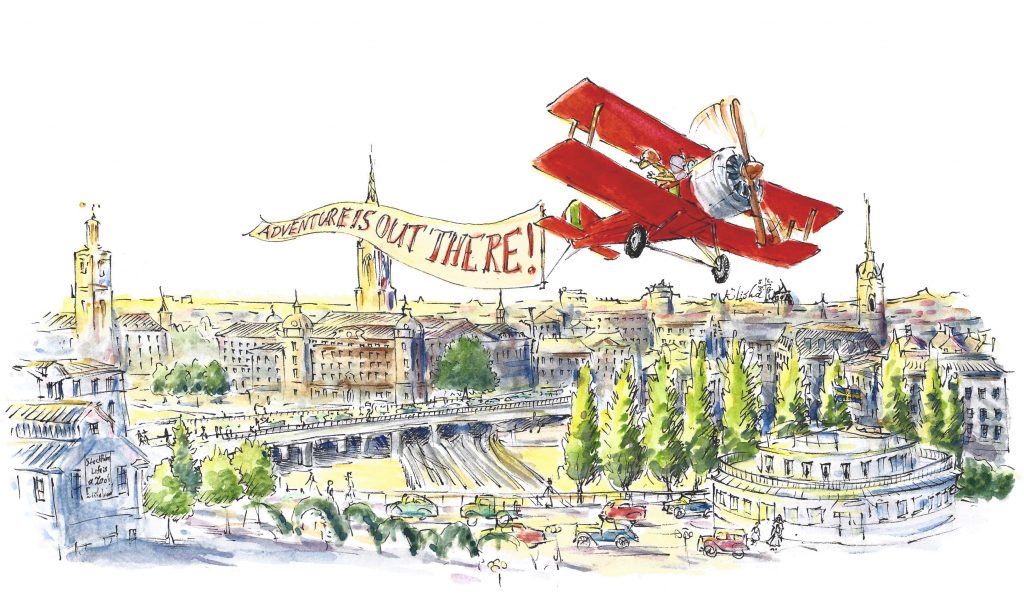